Nude art is about male and female nudity in history and today. From the classical world to the performance art in these days. Watch the changes in nude art.

Visit also our overview of Nude art events 2015 and the very interesting website about the famous artists at work on Artist TV – Tube .

In the classical world, the fountainhead of Western art, it was the beauty of the standing male nude that signified moral protection.

The male nudes who people the walls of art galleries carry on the classical tradition of the standing male nude as the expression of virility.

With the exception of the standing statues of Venus, goddess of love, carved with her genitals modestly covered by her hand, the Greeks were not interested in the nude female body, seeing women as ill proportioned creatures who could not be made to fit into the pattern of male perfection.

The female nude is a Renaissance invention, a product of the Venetians painters.

The nude male, whilst being depicted in quite another way to the female, has a definite role in nude art. A male nude’s presence in a painting of a female nude, or the suggestion of the outlines of this form as a foil to her, is intended to flatter the male psyche ans set up undeniable reference points of comparison on the part of the male onlooker.

The famous human artist Raphael Santi was one of those who the male nude presence in a painting or drawing of a female nude.

Female nude art, recent arrival in the history of art

For the female figure, an interpretation of Eve in paintings and Venus in particularly, that the female nude is much more familiar territory than the male since the 17th century.

But of course, in ancient times, the balance of nudity was much more equal. The female nude is much more normal and appealing than the male.

A reverse of the view of the ancient classical world, again back to the balance. The female body, unclothed is obviously beautiful in a way that the male body is often problematic.

The figure that launched a thousand female nudes was first seen in all her glory on a canvas in the home of the Venetian intellectual Girolamo Marcello, painted in 1507 by Giorgione and Titian. See also the Nude figure artists directory of the 15th century.

Its appearance at this time celebrated a humanist way of thought, one that honored the senses instead of attempting to conquer them as the medieval world had done.

There are hundreds of successors who fall into line behind her. They are fine art’s versions of music’s variations on a theme.

The female nudes are voluptuous, are slim. Sometimes the female nude is in a landscape or indoors. Very few are completely naked. They wear a necklace, a bracelet, a hat. And they have hair. Not public hair but hair on their head, curling, flowing and as wayward and beautiful as the feminine ideal itself.

The nude distances its embarrassing links with intimacy and makes it suitable for public consumption.

Despite this, some nudes escape from the conventions of high art and allow a sexual element to intrude. The hand that protects a woman’s modesty occasionally suggests more private pleasures. Read more: Nudes of Jules Pascin.

Genitals in nude art appear with increasing boldness from the end of the 19th century, sometimes transposed to the folds of the surrounding sheets.

The strength of woman comes from the fact that psychology cannot explain us. Men can be analysed and women … merely adored.

Often, the confronted gaze of a nude looking out at her viewer has that “how dare you stare”. This combined with a haughty allure gives the nude a creature of sensual pleasure and the work commissioned to be enjoyed at leisure but somehow.

It should be remembered that most art was either commissioned by the church or the aristocracy or wealthy. Most commissions were from men and most painters were men.

History of the depiction of nudity

Strangely, in the history of the depiction of nudity, conscious humor and a light mischievous sense has rarely been the goal.

Watch the changes in nude art. Look at the first nude painting The Virgin and the child by the French artist Jean Fouquet, 1425-1481 and the mentioned painting before, Sleeping Venus by the Italian Giorgione, 1470-1510. The first one is even abstract.

Click on the images to enlarge their nude artwork.

We made the unique Nude Figure Artists Directory with the greatest masters of nude art through the centuries to follow the evolution of their nude art.

> Overview of nude artists from the 15th till the 21st century

Sex is a huge reason. See Priapus, god of fertility, with a permanent erection, and became a popular figure in Rome.

The feminist movement began from 1960 change the intention of nude art.

“Cut Piece” by Yoko Ono is a good example of performance nude art. The audience in a theater were invited to cutting away her clothing until she was nude.

Nude artists in the 20th and 21st century

The artists from these centuries do not offer the stunning art from the 19th century.

But not for all artists. Watch the Chinese artist Sanyu, 1901-1966 with his brilliant work of art and the American Roy Lichtenstein, 1923-1997, with a more graphic approach of the subject.

And then there is the English artist Jenny Saville, 1970, with painted nudes as flesh … What is happening?? Crisis, Internet, afraid of 3D printing?

> Please think about this theme and tell us

Click on the images to enlarge their nude artwork.

Nude artists from the 20th and 21st century

> Overview of nude artists from the 20th and 21st century 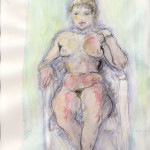 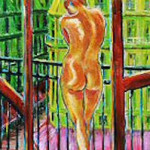 Naturist Art concerns the tension between the naturist and his or hers surroundings. Nude art is about naked people. Naturist Art engages a social renewal as naturism is. Naturist Art is a part of nude art with self-respect and a positive relationship to the body. Read more

Loek de Winter, naturist artist, has studied and enjoyed the female form as represented by painters of all centuries and often pays a direct homage to them and their individual styles and hallmarks.

Nudity is the longest enduring art theme in history and will nude art ever undergo innovation?

One thought on “Nude art, male and female, in the history of depiction of nudity.”