Raphael of Urbino (Raffaello Sanzio da Urbino or Rafaël Santi) was the most graceful of all modern draftsmen and painters of the High Renaissance. Raphael drawings embodies the principles of the nude in new Classic style, which Leonardo da Vinci and Michelangelo had begun at the end of the 15th century.

Raphael Santi is one of my favorite nude artists. Other preferred artists are Henri de Toulouse-Lautrec and Jules Pascin.

All are related with:
> Nude art in the history of nudity

Raphael drawings in his teens. His self-portrait, 1496 ?

Raphael was born in Urbino, Italy in 1483. His mother Màgia died in 1491 and his father, Giovanni Santi, a provincial painter working at the court of Urbino, died in 1494. Raphael was an orphan when he was only eleven years old.

Raphael did continue the studio of his father in Urbino. On the left one of Raphael drawings, his beautiful self-portrait.

The artist, he met and admired there was Luca Signorelli. A well-known nude figure artist of the 15th century.

Raphael has remained in Urbino until 1500.

On 10th December 1500, he received the commission for his first major painting, the Saint Nicholas of Tolentino for the church of St. Agostino in Citta di Castello. it was a joint contract with another painter, because Raphael was only seventeen at the time. This painting was damaged due an earthquake. Only different fragments are left.

On 10th December 1500, Raphael received the commission for his first major painting, the Saint Nicholas of Tolentino for the church of St. Agostino in Citta di Castello.

Raphael had been summoned to Rome

Raphael has worked in the studio of Pietro Perugino, who was the leading artist of the region. Pietro Perugino was Raphael’s master and gave him the necessary training.

Raphael first visited Florence in October 1504. This trip was fundamental in shaping Raphael’s development, for in 1504 Michelangelo and Leonardo da Vinci were still engaged on the project to decorate the Hall of the Great Council in Florence with two enormous frescoes.

From 1504 to 1509 Raphael was based in Florence. By 4th October, 1509, had been summoned to Rome by Donato Bramante, the architect responsible for rebuilding St Peter’s.

Pope Julius II had undertaken a campaign of redecoration in the Vatican Palace. Among other artists Raphael got his first commission, the ceiling of the Stanza Della Segnatura.

Rome itself shaped Raphael’s development. There was a renewed interest in classical antiquity. His subsequent career in Rome is one of almost unparalleled success. After the death of Julius II in 1512, Raphael continued with the support of his successor Pope Leo X.

Raphael carried out also a number of important commissions for private patrons.

Raphael maintained responsibility through his sketches, like Eight Seated Bishops, 1516

Raphael’s success in these years meant that could not undertake this volume of work single-handed. From about 1514 he recruited a workshop of young and talented painters.

The part played by Raphael’s workshop differs from that of earlier ones, where the assistants confined a secondary role.

The artist in Raphael’s shop assumed an increasingly important role in the execution of large-scale commissions. But Raphael maintained responsibility for the design through Raphael drawings.

The contemporary accounts record the deep shock felt by the whole of the Vatican at the loss of such a gifted artist when he was still only 37 years old.

Non of his immediate successors inherited his genius for organisation large-scale commissions, and none was gifted with his ability to assimilate into a personal style.

Raphael’s death was caused by sex with with a girlfriend. His illness lasted two weeks. Raphael was buried in the Pantheon in Rome (Find the Pantheon on Google Maps below).

What did Pope Adrian VI after the death of Raphael

After the death of Leo X in 1521, Pope Adrian VI (or Adrianus VI or Hadrianus VI), born Adriaan Florenszoon Boeyens in Utrecht, the Netherlands, was proclaimed pope and the only Dutch pope. He disapproved the hunt for well-paid jobs, the luxury living with so many and valuable art in the Vatican.

The pope tried to impose reforms to take effect. He took a lot of Dutchmen in service. One of them was Jan van Scorel, also from Utrecht. He was a famous and international operating artist for that period. Jan van Scorel became curator of the Vatican’s artworks and successor to Raphael Santi.

The Romans found Pope Adrian VI a barbarian from the North. In 1523 the Pope died and the Romans celebrated. Jan van Scorel fled.

The study of Raphael drawings is of particular value, since we can trace in them the transformation of the old tradition in which drawings were used simply as a means to an end, without artistic value in themselves.

It is true that almost all of Raphael drawings were to help in the preparation of a specific commission, but, by the end of his career, these like the drawings of Leonardo and Michelangelo, had become finished works of art in their own right. The Raphael drawings are important art.

The next is a video about Raphael drawings:

Raphael drawings reveal a brilliant use of the techniques current in Italy at the beginning of the 16th century.

For the preparatory sketches in which he is still working out the composition, Raphael generally used either silver-point or pen and ink. To make a silver-point drawing, Raphael prepared the paper with a colored powder. When he drew on this specially prepared sheet with a fine stylus (silver) he produced a firm but slight line witch could not be erased.

The pen and ink drawings, which were made with a quill pen sharpened by the artist himself and with a specially prepared ink, allowed the artist great spontaneity and freedom.

At a later stage in the preparation of a panel or fresco Raphael made detailed drawings in either red or black chalk.

Raphael drawing 1506. Leda and the Swan. Pen and brown ink.

Raphael drawings were collected during his own lifetime.

In 1515 he exchanged drawings with the most distinguished Northern artist of the time, Albrecht Dürer (1471-1528), who lived in Nuremberg (Germany).

Raphael drawing is inscribed by Albrecht Dürer with the date, 1515, and a note saying that Raphael sent it as an example of his work.

How Raphael learned to draw

When he was a young man Raphael imitated the style of Pietro Perugino, his master and gave him training. The technique of drawing in grey chalk is one that used in contemporary drawings by Perugino and the rather clumsy, stiff figures are directly derived from Perugino.

For the next four years Raphael continued to exploit the drawing style by Perugino with growing mastery, but with little attempt at radical changes. The study of a head is drawn with a slight turn to the right that is the stock pose of Perugino’s studio.

One of the few artists with whose work Raphael would have been familiar was Luca Signorelli. He had admired his style.

By preparing detailed drawings at this late stage Raphael was able to control the expression of important figures.

In 1504 Raphael went to Florence. Raphael’s reaction to the works of Leonardo and Michelangelo that he saw on his arrival in Florence cannot be bettered: As Leonardo’s style pleased him more than any he had ever seen, he set to work to study. He sought as far as possible to imitate Leonardo.

Raphael drawing, Leda and the Swan

The drawing Leda and the Swan is an example of Raphael’s reliance on Leonardo.

The greater plasticity is achieved by a system of curved hatching lines, which suggests the figure’s roundness more effectively than straight hatching lines.

At least one drawing by Raphael is a direct reflection of a work by Michelangelo. The study of Michelangelo’s David. This is the one he used for further development. This change indicates to achieve a more dynamic figure style.

In Rome Raphael is searching for the most effective gestures. In the drawing for the figure of Theology (or The Assumption of the Virgin), which is one of the most attractive and brilliant of his preparatory sketches.

He had overcome the stiff insistence on outline that characterized the earlier drawing, and the spiral movement in the later drawing gives the whole figure great energy.

Nude drawings of Raphael have been of great significance for nude art. As well as the nude figure artists. The drawings are understandable and have the right proportions.

To learn to draw well it is important to have a good example. Raphael is one. The following website contains useful and historically interesting nude drawings.

All are related with:
> Nude art in the history of nudity

4 thoughts on “Raphael Drawings. Raphael Santi as draftsman, his life, training and development.” 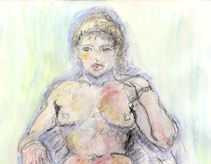